Ireland, a Land of Welcome for Black Abolitionists

A new book and documentary about Frederick Douglass explore the intersection of Irish and Black history. 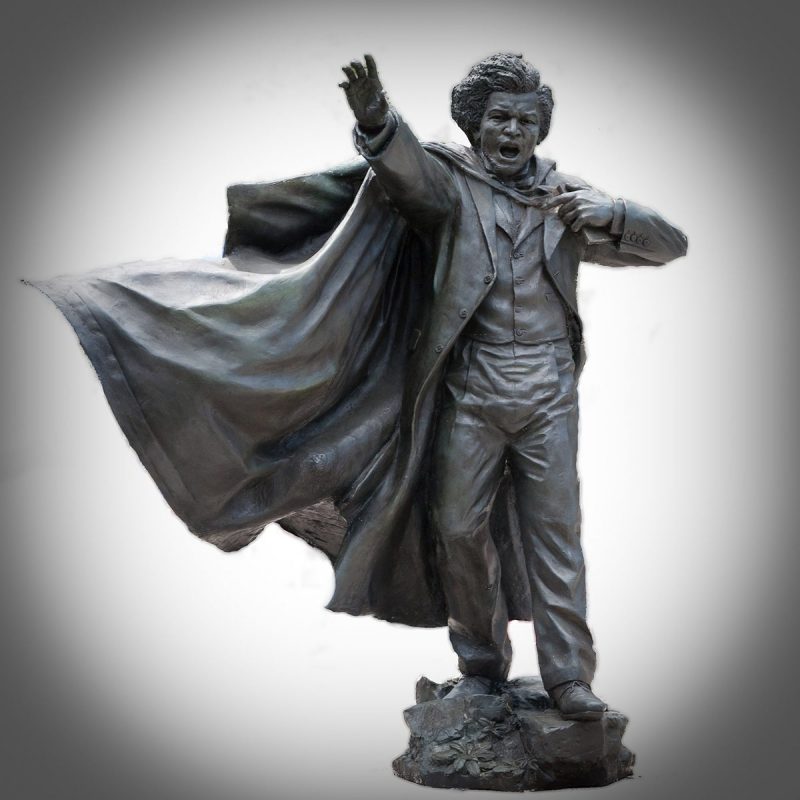 This statue of Frederick Douglass at Ireland's Great Hunger Institute at Quinnipiac University in Connecticut was created by Andrew Edwards. The photograph is by Jack Rummel.

In September of 1845, Frederick Douglass, champion of the rights of enslaved African-Americans, made his first trip to Ireland. His book, Narrative of the Life of Frederick Douglass, an American Slave was recently published and attracting attention that could have meant his recapture. So, William Lloyd Garrison suggested a trip overseas for safety. It did accomplish this but brought many more benefits too.

Later he wrote about that time of his life, saying:

“Eleven days and a half gone and I have crossed three thousand miles of the perilous deep. Instead of a democratic government, I am under a monarchical government. Instead of the bright, blue sky of America, I am covered with the soft, grey fog of the Emerald Isle [Ireland]. I breathe, and lo! the chattel [slave] becomes a man. I gaze around in vain for one who will question my equal humanity, claim me as his slave, or offer me an insult. I employ a cab—I am seated beside white people—I reach the hotel—I enter the same door—I am shown into the same parlour—I dine at the same table—and no one is offended … I find myself regarded and treated at every turn with the kindness and deference paid to white people. When I go to church, I am met by no upturned nose and scornful lip to tell me, ‘We don’t allow n****** in here!’”

Originally intending to stay for four days, he toured the country for four months, ultimately giving 50 speeches. All of them were different and given without notes. He ended one of his speeches in Ireland with the words, “Agitate! Agitate! Agitate!”

And this is the title of the new documentary about Frederick Douglass in Ireland that Dennis Brownlee will release later this year. It’s narrated by Douglass’s great-great-granddaughter, Nettie Washington Douglass. Brownlee founded the African American Irish Diaspora Network (AAIDN) in February 2020 to help African Americans connect with their Irish heritage. On Oct. 28, Irish Ambassador to the US Daniel Mulhall hosted an online event to introduce the new project and organization.

Renowned Irish historian Christine Kinealy, a member of the board of AAIDN, also spoke during the online event about her new book Black Abolitionists in Ireland. She shared several fascinating stories of accomplished Black writers, speakers, and activists who traveled in Ireland in the 18th and 19th centuries. Kinealy said the Irish people felt empathy for enslaved Black people because of the oppression they themselves had endured. She said Douglass also sympathized with the Irish and was shocked by the poverty he saw there in 1845, the first year of the Great Famine.

Both Brownlee and Kineally talked about the meeting between Douglass and Daniel O’Connell, the great Irish statesman who won Catholic emancipation in Ireland and played a key role in ending slavery in the British Empire in 1833. O’Connell believed in human rights for everyone and spoke out on behalf of Africans, Jews, and Maoris too.

After attending a speech given by O’Connell in Dublin, Douglass said, “I have heard many speakers within the last four years – speakers of the first order; but I confess, I have never heard one by whom I was more completely captivated than by Mr. O’Connell. . . . It seems to me that the voice of O’Connell is enough to calm the most violent passion. . . . There is a sweet persuasiveness in it, beyond any voice I ever heard. His power over an audience is perfect.”

When the documentary is released, I’ll let you know in the ICC newsletter. Meanwhile, you may want to check out this page on the Quinnipiac University website. It’s full of interesting history about Frederick Douglass in Ireland.