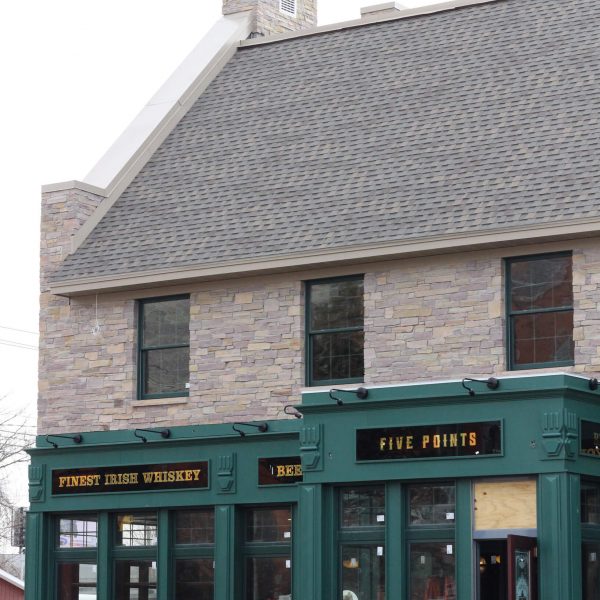 With a late winter push that’s brought the Irish Cultural Center of the Mohawk Valley one step closer to completion, John Sullivan of John Sullivan and Sons Construction describes their progress as being “a few more nails and a couple of cans of paint” away from the official opening and grand reveal. While that may be a tad rosy, the end of the rainbow is very much in sight.

Standing on the hallowed ground that was once the site of Utica’s first Irish church, the 21,000 square foot Irish Cultural Center comprises a 285-seat event center capable of hosting dinners and receptions, a huge kitchen for handling the daily dinner menu as well as internal and external catered activities, parking for 130 vehicles, an Irish cultural museum, office spaces for local Irish organizations, and the pride of it all – an authentic Irish pub known as Five Points Public House.  And despite Kelly’s three guests seeing the building through vastly different lenses, each echoed the same sentiment: There simply is not an Irish pub this beautiful anywhere from New York to Buffalo.

The pub, which was designed and built-in Ireland and shipped to the site in three containers, boasts a Whiskey Room/Library, a huge fireplace, a traditional Irish snug, a performance stage, and an attached outdoor dining/drinking area, with its own fireplace. The pub seats 102 throughout a large space that has been cleverly partitioned with beautiful wooden half walls and custom-designed frosted glass panels.

And now for the burning question: When will it open? Karl is optimistically looking at a late spring opening, but in the meantime, officials are looking at hosting some kind of event on St. Patrick’s Day. Whenever the opening is, one thing is certain: It will have been well worth the wait.