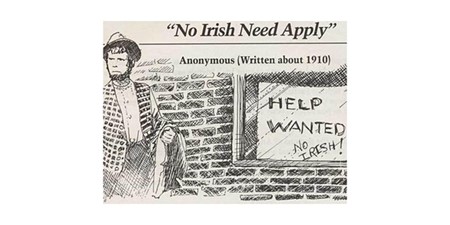 Learn about the discrimination that Irish immigrants faced in mid-19th century America summed up in four words: “No Irish need apply.”

Is the “No Irish Need Apply” construct fact or myth? Very few signs still exist that once read “No Irish Need Apply” and the ones that do exist were often proven to have been made up “reproductions.” Searches of classified ads from that time, however, tell the story that there was indeed a significant level of discrimination of Irish and many other nationalities emigrating to the United States.

The political cartoons by Thomas Nast and published in Harper’s Weekly and other print media of the day depicting Irish immigrants as violent, ill-tempered simians played no small role in fueling the discrimination fires. It was not the landed-gentry class that made up the majority of Irish immigrants, but rather the agricultural laboring class fleeing famine and anti-Catholic discrimination by the British ruling class. These depictions were not new but followed the Irish across the sea – the British press were equally cruel.

Our presenter Mike Carroll will show examples of 19th century cartoons and political pamphlets that indeed fomented the mid-19th century discriminatory practices towards the Irish and other immigrants. We will further see how the Irish overcame this discrimination taking up powerful positions as civic leaders and fueling American progress.

This event is free, but you are asked to register on EventBrite to ensure a seat.