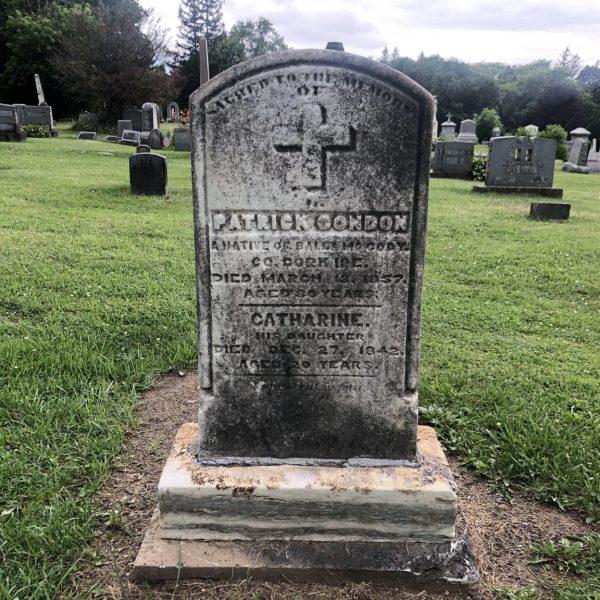 On Thursday, November 10, 2022, Irish researcher and scholar Tony O’Floinn will present a Zoom lecture on the Irish poet, Pádraig Cúndún.

Pádraig Phiarais Cúndún (Patrick Condon) born 1777, was an Irish language poet who emigrated to the United States from Ballymacoda, Co. Cork Ireland in 1825. Having relatives already settled in Deerfield New York, he settled there along with his wife Margaret, son Pierce, and daughters Eileen, Kathleen, and Margaret.

Padraig never learned the English language but would write letters, in Irish, some in poetic form, back to his friends in Ireland. These letters were often an expression of his longing for Ireland as well as expressing his fondness for his newfound home. Many of the letters describe what it may have been like for the Irish immigrant during the mid-19th century in our area.

Condon died in 1857 and is buried in St, Agnes Cemetery in Utica.  His gravestone was located last year by researchers from Comhaltas Ceoltóirí Éireann’s local branch, Craobh Dugan-O’Looney, and was up-righted and restored by volunteers from the Irish Cultural Center, Craobh Dugan-O’Looney and McGrath, Myslinski, Karboski & Nunn Funeral Home.

Our presenter, Tony O’Floinn is a lecturer at Mary Immaculate College, Thurles campus. He wrote his doctoral thesis on Cundun and will discuss Cundun’s life in both Ireland and Utica, Cundun’s view on his life in the United States, and the significance of his writings.