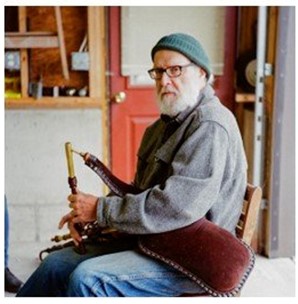 On Sunday, July 17, 2022, the Utica area chapter of Comhaltas Ceoltoiri Eireann (CCE), Craobh Dugan-O’Looney — with grateful assistance from the Government of Ireland’s Department of Foreign Affairs Emigrant Support Programme, Comhaltas North America, and Meitheal North America – will host a very special presentation called “Irish Pipers of Early 20th Century North American.”   This program, which will take place at 1:30 PM (both live at the Center and via Zoom) will discuss the role played by early 20th century pipers bringing the music of the Irish uilleann pipes to the ears of an American audience.

The uilleann (pronounced Ilion – like the village in the Mohawk Valley) pipes, Irish bagpipes, enjoyed considerable popularity in early 20th century America having been featured in vaudeville acts as well as more private and intimate settings such as weddings, funerals, and house parties. This intricate and difficult to master instrument is — in the hands of a masterful player — capable of producing the most hauntingly beautiful Irish music. In this presentation you will learn about the lives of the early 20th century American masters of the pipes and the impact they had on traditional Irish music here and in Ireland.  You will also learn the influences that contributed to the demise of its popularity by the middle of the 20th century.

Presenter Nick Whitmer, a retired librarian, has been playing uilleann pipes for nearly forty years.  He was fortunate to acquire a classic set by the Taylor brothers in 2013.  Inspired by this, he began compiling information about Irish pipers and pipemakers in North America.  One result of this work is the website Lives of the Pipers (livesofthepipers.com), with short biographies of more than 60 pipers active before 1950, and an inventory of pipemakers active in the United States from the same time period.  His research has uncovered information long forgotten, debunked a few false claims, and given a sense of the variety and possibilities of lives lived in association with this instrument. Whitmer was invited by the prestigious Na Píobairí Uilleann in Dublin, Ireland where he presented his talk this past May.

Nick will be accompanied by Utica native Michael Roddy. For nearly 25 years, Michael has been developing a unique blend of Scottish and Irish piping styles.  His ability to comfortably move between competitive Scottish piping and bellows piping, pipe bands and folk bands, uilleann pipes and whistles has led him to be a highly sought after performer and teacher. Michael performs a wide range of music in a number of diverse settings.  His trio Arise & Go tours extensively throughout the US and Canada and the band released their first full length album in 2019.