The Irish Socialite Who Became a Soldier

She could have lived a life of luxury, but she traded in her gowns for guns when she embraced the cause of Irish freedom. 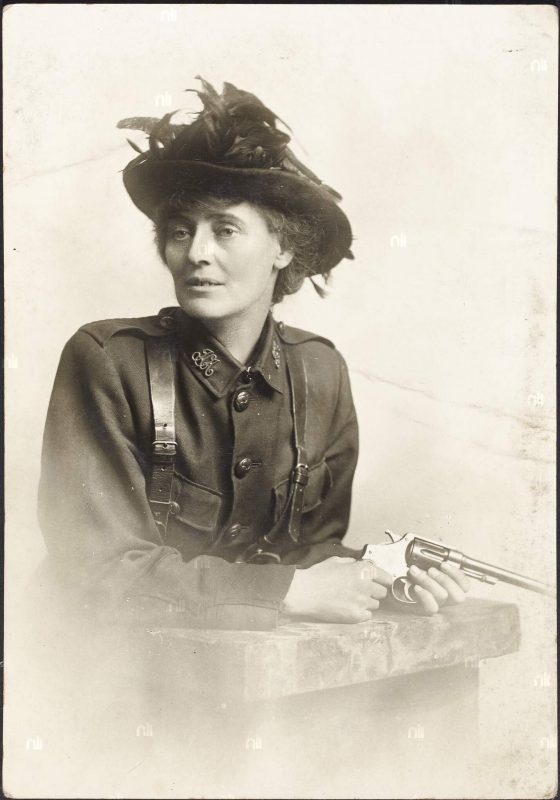 Constance Gore-Booth, or “Con” as her family and friends called her, was born in London in 1868. She grew up traveling between her parents’ townhouse there and the family’s 32,000-acre estate in County Sligo known as Lissadell. She and her four siblings enjoyed horseback riding, hunting, art, music, and parties. But the family did not turn a blind eye to the impoverished people who lived and worked on their estate, as many of the other landowners did. To help poor women earn an income, her mother Lady Georgina, founded a school of needlework where students were able to sell what they crocheted and embroidered. Her father, an Arctic explorer and philanthropist, was known for his generosity to his tenants, helping them through the famine of 1879.

Perhaps it was their altruistic attitude that sparked a desire in Constance for more meaning in her life. In one of the journals she kept as a young girl she wrote, “Nature should provide me with something to live for, something to die for.”

Later another voice inspired her quest for a cause. William Butler Yeats, who would win a Nobel Prize for his poetry in 1923, was her Sligo neighbor and friend. He often spoke of social issues and Irish nationalism with Con and her sister Eva.

So, when most girls of her class and age were trying to find husbands, Con left for London to study at the Slade School of Art. Later she moved to Paris to further her art studies. For years, she claimed she was “married to art.” But when she met Casimir Markievicz, a Polish count and fellow artist, she changed her mind, at least for a time. When they married in 1900, Con became Countess Markievicz. Their daughter Maeve was born at Lissadell in 1901. They left the baby there to be raised by Con’s grandparents and went to Dublin to pursue their art. Casimir wrote plays in which Constance often appeared.

But more and more, Constance was moved to shift her focus from art to social causes. She had been involved in the suffragette movement for some time with her sister Eva Gore-Booth, but now in Dublin, she responded to the poverty and growing sense of Irish nationalism she saw there. She sold her jewelry and set up soup kitchens. She joined James Connolly’s Irish Citizen Army. She helped found Na Fianna Éireann a scouting organization to teach teens how to use weapons. (Since her days at Lissadell she had been known as a very good shot.) Not just an organizer, she got personally involved in the work. People reported seeing her hauling heavy bags of peat in her car and carrying it up long flights of tenement stairs.

During all this activity, Count Markievicz decided to go to the Balkans to work as a war reporter. The separation was amicable and although they never lived together again, he and Constance corresponded.

Considering her close connection with the Irish labor organizer James Connolly and her passionate dedication to Ireland, it was inevitable that Constance would be involved in the Easter Rising of 1916. Though she would much prefer to work peacefully for her suffering neighbors, she felt the need to take up arms for this cause. She wrote:

“I have always hated war and am by nature and philosophy a pacifist, but it is the English who are forcing war on us, and the first principle of war is to kill the enemy.”

On that fateful Easter Monday, Constance donned the military uniform of a staff lieutenant, and took up her post as second in command at St. Stephen’s Green with Michael Malin. Under heavy sniper fire from the tall buildings surrounding the park, she moved her troops to the College of Surgeons nearby and was able to hold out for the week doing her own sniper firing from the roof until the Rising’s leader Padraig Pearse issued the order to surrender. When the moment came to face the British officer, she kissed her revolver before handing it to him.

For this week’s work, Constance earned a death sentence from the British military court, though it was commuted to a life sentence of penal servitude because she was a woman, an outcome she did not favor. She said, “I do wish your lot had the decency to shoot me.”

Under the general amnesty of 1917, Constance was released from her English prison and returned home where she continued to fight for Ireland as a politician.

In the General Election of December 1918, she was the first woman ever elected to the British House of Commons, but with the other members of Sinn Féin she abstained from taking her seat. Instead, she served as Minister of Labor (1919-21) in the first Dáil (Irish legislature) during the Irish War of Independence. She opposed the Anglo-Irish Treaty of December 1921 which ended that war, and so found herself fighting with guns again during the Irish Civil War (1922-23). For the next four years, she continued to speak out, serve prison sentences, help the poor, and win elections.

Just five weeks after her election to the 5th Dáil, she suffered an attack of appendicitis which led to her death on July 15, 1927. Casimir was by her side.

Three hundred thousand people lined the streets of Dublin to bid her farewell. Her old compatriot Eamon de Valera, with whom she had fought in the Easter Rising and served in the new Irish government, gave the eulogy at her funeral, including these words:

“Ease and station she put aside and took the hard way of service with the weak and the downtrodden. Sacrifice, misunderstanding, and scorn lay on the road she adopted, but she trod it unflinchingly … The world knew her only as a soldier of Ireland, but … we knew the friendliness, the great woman’s heart of her, the great Irish soul of her … ”