A Primer on the 1916 Easter Rising 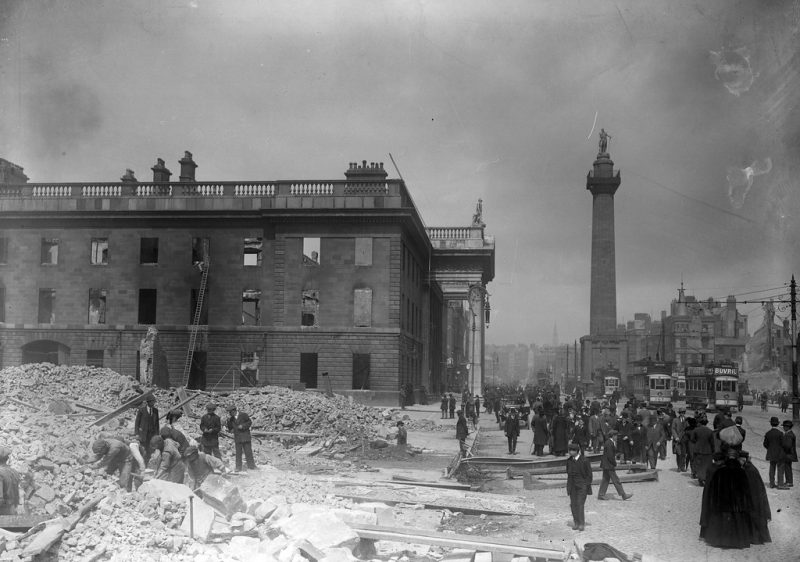 We associate many things with Easter: bunnies, candy, spring, lilies, along with the obvious religious connotations. But rebellion? Well, you do if you’re Irish. For it was shortly after noon on Easter Monday, April 24, 1916, that Patrick Pearse stood in front of the General Post Office on O’Connell Street (then Sackville Street) and read to the hushed crowd the Proclamation of the Republic containing the following words:

“We hereby proclaim the Irish Republic as a Sovereign Independent State, and we pledge our lives and the lives of our comrades-in-arms to the cause of its freedom, of its welfare, and its exaltation among the nations.”

Thus was launched one of the most glorious failures in history, the 1916 Easter Rising. As April 24-29 marks the anniversary of this landmark event, the Irish Cultural Center will offer opportunities to learn about the Rising. So let’s start out with a short primer:

Led by schoolmaster Patrick Pearse, somewhere between 1200 and 1500 Irish Volunteers and 200 members of the Irish Citizen Army seized the Dublin General Post Office and other strategic positions throughout the capital. They held out valiantly for five days against vastly superior forces, surrendering at the end but succeeding in spreading the Irish Republican concept to the general public. This made a split from England not only possible but inevitable.

Looking back on it now, the rebellion was clearly doomed from the start. Much of the leaders’ hopes were pinned to two unlikely events, a major uprising by the Irish populace and assistance, arms and manpower from Germany. In addition, few of the rebels had military experience. This proved to be costly at sites like St. Stephen’s Green, a park in Dublin surrounded by high buildings. The insurgents ill-advisedly dug trenches there where they could be targeted and harassed by British sharpshooters. And finally, as is all too often the case in Irish history, disagreements among the various rebel factions reduced their forces to numbers far too few to successfully defend the positions they had taken.

Pearse issued orders in early April for three days of “parades and maneuvers” by the Volunteers beginning Easter Sunday, knowing they would understand what he meant by those orders. However, Irish Volunteer Chief of Staff Eoin MacNeill, who had been against the rising from the onset, issued a countermand to all Volunteers. MacNeill canceled all actions for Sunday when he learned that the ship carrying the promised weapons had been scuttled. This only succeeded in putting the rising off for a day. The leaders rescheduled the rebellion for Easter Monday, but this confusion greatly reduced the number of Volunteers who turned out. The rebels had the advantage of the bank holiday, which meant many of the soldiers who ordinarily would have been guarding the key sites were off duty. As a result, the insurgents were able to occupy many of the positions they coveted with surprising ease.

The Volunteers’ Dublin division was organized into four battalions, although as a result of the countermanding order all of them saw a far smaller turnout than originally planned. The 1st battalion, numbering about 250 men, was to occupy areas to the northwest to guard against attack from the west. The 2nd battalion of about 200 men gathered at St. Stephen’s Green with orders to take Jacob’s Biscuit Factory and other sites in the area before heading to the GPO. Éamon de Valera’s 130 men of the 3rd battalion were to take Boland’s Bakery and a number of surrounding buildings to cover the main road and railway from the harbor at Dún Laoghaire. The 4th battalion, numbering about 100 men, was to occupy the workhouse known as the South Dublin Union to the southwest and defend against attack from the Curragh.

Various other smaller units were dispatched to other sites, while the remainder was to occupy the General Post Office. This was the headquarters battalion and included five members of the Military Council, Pearse, James Connolly, Thomas Clark, Seán Mac Dermott and Joseph Plunkett. The headquarters battalion, led by Connolly, charged the GPO, allowed the customers and staff to leave, and took a number of British soldiers prisoner. Two flags were hoisted on the flag poles on either end of the GPO roof: the tricolor and a green flag bearing the inscription “Irish Republic.” A short time later, Pearse read the Proclamation of the Republic outside the GPO.

Each year, an Irish military member re-enacts the reading of the Proclamation at the GPO. The video above shows the ceremony in 2019.

Despite being caught off guard, the British forces recovered quickly and began to exploit their tremendous advantage in manpower and firearms. A detachment of troops was sent to Sackville Street to investigate the situation at the GPO. Troops were sent to relieve Dublin Castle. Reinforcements were requested from nearby barracks and from England. As battles broke out throughout the various rebel-occupied sites during the week, the superior numbers and firepower of the British gradually took their toll on the Irish forces. City Hall was taken on Tuesday morning. The rebel position at St. Stephen’s Green was made untenable after the British placed snipers and machine guns in the Shelbourne Hotel and surrounding buildings. Meanwhile, British field artillery pounded positions throughout the capital, reducing much of Dublin to rubble. On Wednesday the guns shelled Liberty Hall and then began firing at rebel positions in O’Connell Street. Heavy fighting occurred at the rebel-held positions around the Grand Canal as British reinforcements advanced towards Dublin. While the Volunteers inflicted heavy losses on British troops trying to advance towards Dublin Castle, they were unable to stop the advance.

After days of shelling, the rebels at the GPO were forced to abandon their headquarters when a fire caused by the shells spread throughout the building. They tunneled through the walls of the neighboring building and took up a new position, but on Saturday, April 29th, realizing that they could not break out of this position without further casualties, Pearse issued an order for all companies to surrender.

During the week of hostilities, 500 people were killed and 2,500 wounded. Fifteen of the rebellion’s leaders were tried and executed. Connolly was so seriously injured he had to be tied to a chair to be shot. Plunkett, who was also seriously ill, married his long-time companion, Grace Gifford, in jail just hours before his execution. It is said that she heard the shots as she walked away from the prison.

We read all the time that the rebellion was unpopular with the Irish people themselves until after the leaders were executed, but we must at all times remember that history is written by the victors. Recent accounts are emerging that cast serious doubt as to that claim, and it is clear that many of the citizens of Dublin supported the rising. Even among those who did not, however, these executions caused widespread disgust and outrage. After the harsh measures taken against the insurgents, the Sinn Féin separatist movement began to eclipse the Irish Parliamentary Party, heralding the end of British power in Ireland.