The Irish in the US Civil War

A local musician dives deep into the stories of Irish immigrants who fought in the US Civil War. 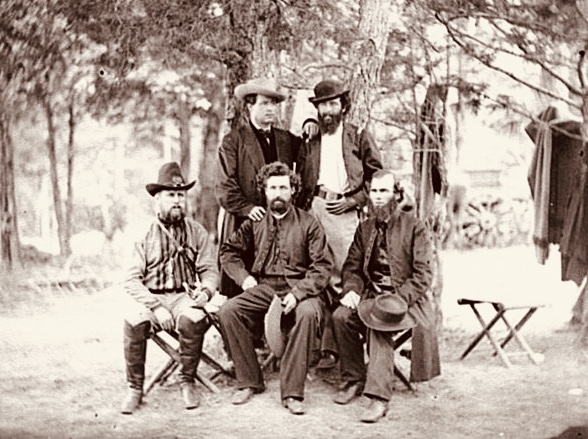 The music and history of the Civil War have been one of my passions since my college days. Recently, along with my musical partner Amanda Straney, I’ve put together a program we call “Soldiers Joy” — a musical and oral history of the North, South, and Irish in the Civil War. We have a program for each, which includes readings from letters and diaries, newspaper accounts, and our playing of the music of the era. Amanda sings and plays fiddle, while I sing and play guitar and banjo.

Researching and writing the programs for Soldiers Joy allows me to do a deep dive into the stories of the men and women who fought and served via their letters, journals, and newspaper accounts – history as told by their voices. It has led me down many rabbit holes. One of those is the role the Irish played in the war, not only in the many contributions to the music of the era but to the major role they played in the battles and the many, many stories that deserve a retelling. Most of what we uncover is next to impossible to recount in our typical one-hour presentation. So I’ve decided to write a series of articles from our efforts.

To set the stage – the 1860 US Census showed that 1,611,304 people were listed as Irish, out of an official total of 31,443,322. Most of these were recent arrivals as a result of the famine years and a general lack of work for the young men in Ireland during the 1840s and 1850s. The census noted that just over 740,000 Irish Immigrants arrived in the country between 1850 and 1860. The census also showed that about 60% of the Immigrant population were males.

There are different estimates of how many Irish fought in the war. The generally accepted number is about 150,000 on the Union, and 20,000 for the Confederacy. Just over 18% of the Irish immigrants fought in the war, compared to about 10% of the general male population! Consider that this was the time of the “Know-Nothing Party” in the northern states, whose platform was anti-immigration, anti-Catholic, and fueled the No Irish Need Apply attitude of business establishments in the Northern States. And yet the Irish turned out like no other to volunteer their services.

The Irish were there at the beginning. The only fatality of the US Marines when they ended John Brown’s raid in October 1859 at the Arsenal in Harpers Ferry, VA, was an Irishman? Luke Quinn, of Brooklyn, a 24-year-old veteran of four years of service, was shot as he was one of the first marines who entered the Arsenal.

A Southern Irishman, Patrick Cleburne from county Cork, was one of only six Irish born Confederate Generals. He was known as the Stonewall of the west. In 1864, sensing that the cause of the Confederacy was lost, he made the recommendation to Richmond that slaves be allowed to fight in exchange for their freedom. The recommendation never saw the light of day and was only made known after the war’s end.

And the Irish were there at the end. Major James O’Beirne, who served throughout the war and was wounded in battle, was Provost Marshall of the District of Columbia in 1865. He was in charge of Lincoln’s deathbed and decided who had access to the room. He also was put in charge of the effort to capture the assassin, John Wilkes Booth.

These are just a few examples of the many stories of the Irish in the Civil War that deserve a retelling. I’ll be sharing them with you in the months to come. And we hope you will join us in the future when Soldiers Joy presents one of our musical programs at the Irish Cultural Center of the Mohawk Valley.