Utica residents struggling during the COVID-19 pandemic received more than 200 bags of groceries at the Irish Cultural Center of the Mohawk Valley. 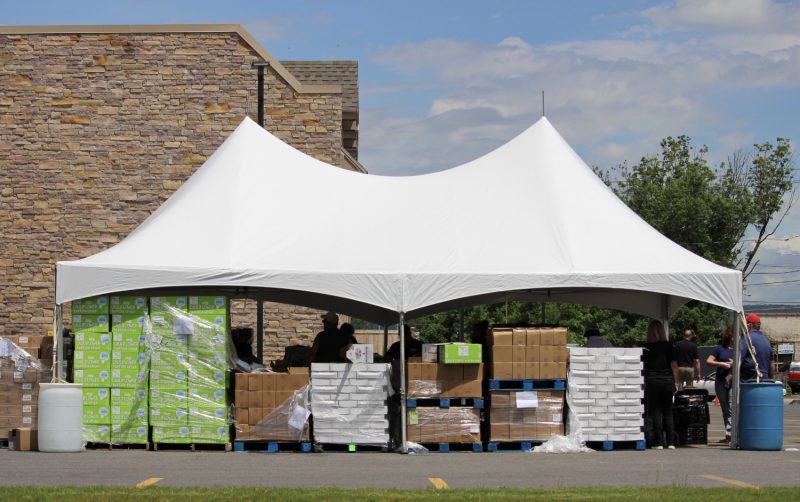 The Irish Cultural Center’s parking lot has been empty for two and a half months since it closed right after St. Patrick’s Day for the COVID-19 lockdown. But on Friday, May 29, it was a busy place. A food giveaway, sponsored and supplied by the Utica Food Pantry and the Compassion Coalition, began at 1:00pm with cars already lined up down Varick and Columbia streets. There were so many that a Utica police officer arrived to direct the flow of traffic. 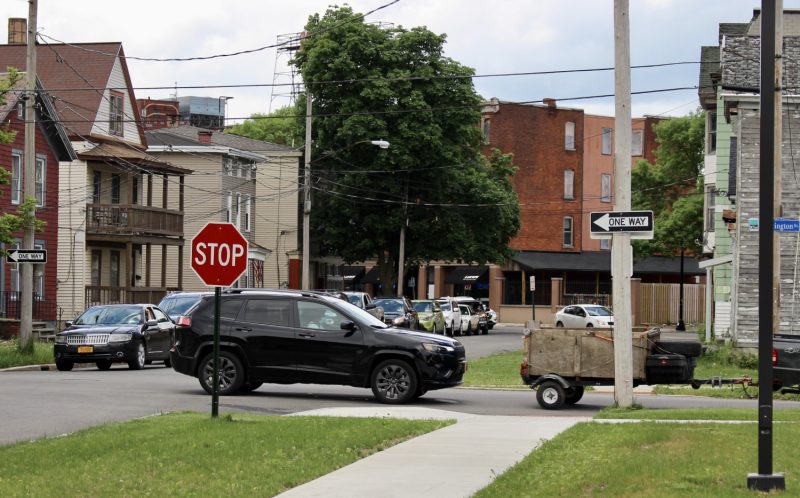 They slowly drove up to a white tent which sheltered nearly 40,000 pounds of food. It wasn’t bangers and mash or colcannon, but the fruits, salads, meats, and even snacks and cookies would nourish and delight a total of 967 area residents from 282 households struggling to put food on their tables during the pandemic. 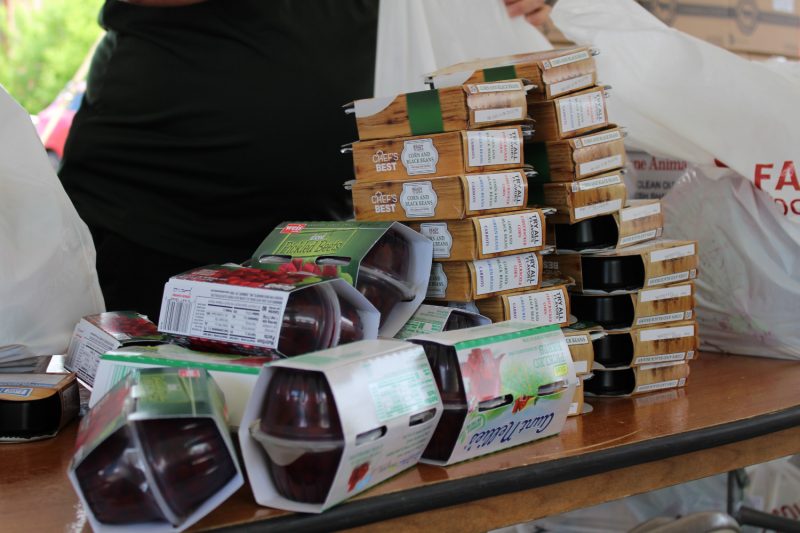 Russ Brooks, Chairman of the Utica Food Pantry and President of the Irish Cultural Center’s board of directors, said the pantry has seen a 40% increase in need since the pandemic began. “We’ve seen some people who have donated to the food pantry in the past now come in for food,” he added. 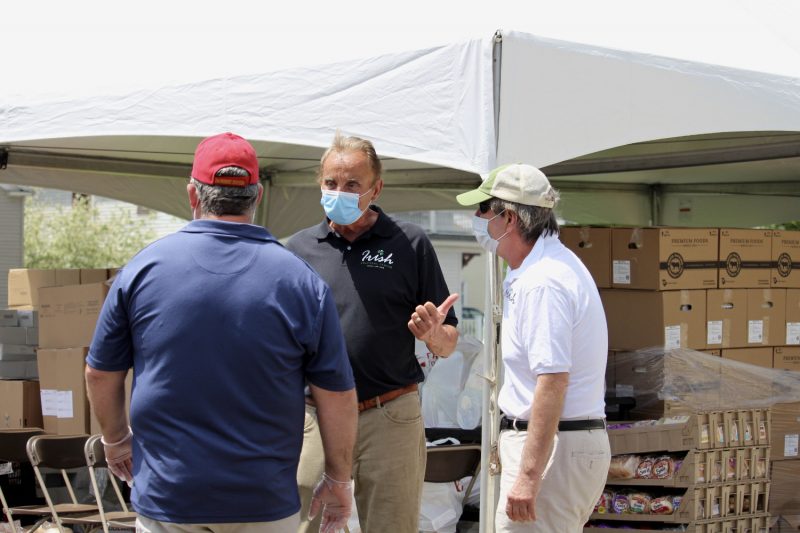 Appreciating the efforts of the volunteers and pantries, Betrus said, “You don’t realize the amount of work that people do year-round. It’s magnified now.”

Utica Food Pantry board member Marianne Brooks takes ICC Treasurer Linda Voce's temperature. All volunteers were checked for everyone's safety.
GAIF board member Ken Lawrence prepares packages of food to give away.
ICC Vice President Peter Karl loads food into a car.
Anne Marie Lawrence, a long-time GAIF volunteer and Kevin Parker, a member of the AOH, pack bags with a variety of food to give away. 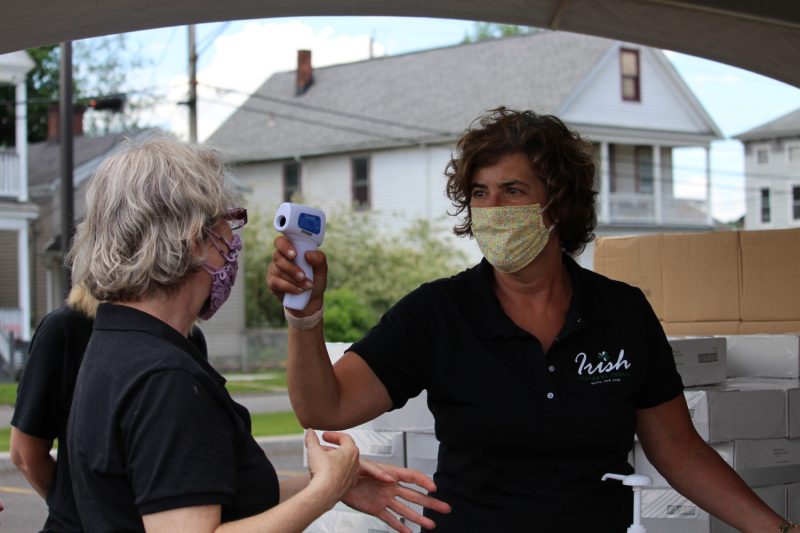 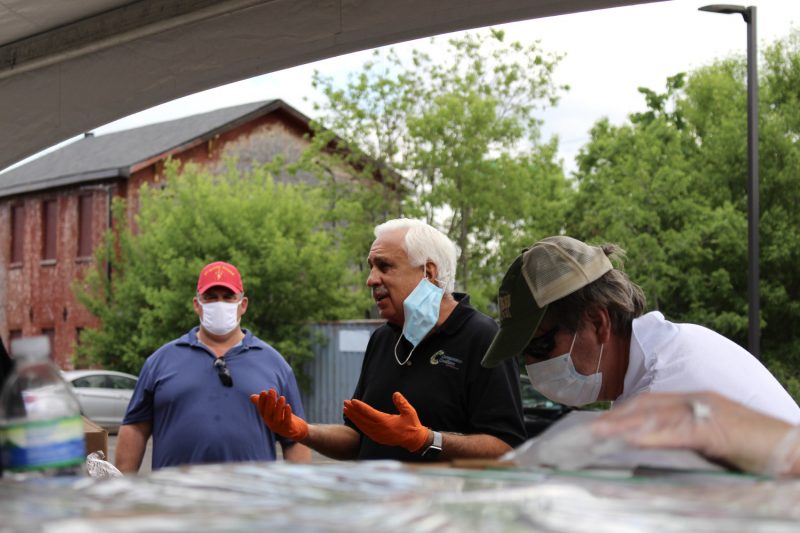 Rev. Mike Servello, CEO and Founder of the Compassion Coalition, blessed the food and volunteers.

Marthem Tchutcha, who moved to Utica from Cameroon, Africa, stood in line with a few others who arrived on foot. She said she has struggled since the pandemic began. “This is very good for me,” she said. “Utica is good to me. I’m very grateful for the food.”