Seanchaí, a Short History of the Irish Storyteller

Ireland is well known for its rich legacy of folklore and storytelling. 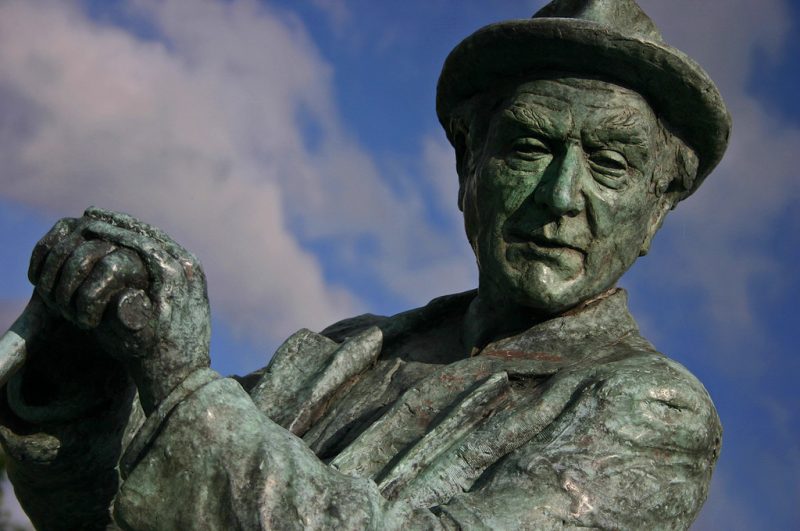 A life-size bronze sculpture of the late Eamon Kelly unveiled in Gneeveguilla, near Killarney, Co Kerry in 2003.

Imagine an Irish monarch holding court on a misty morning. In a deep booming voice, he calls for his bard and all in attendance step back to form a human corridor. They bow their heads as the revered seanchaí (shan-a-key) passes by them to stand before the throne. All observers understand that in Ireland the bearer of the ancient lore wears a rank second only to the king.

Without a written language, the seanchaithe (plural form) of ancient Ireland were vessels carrying the history, genealogies, myths and legends, and other knowledge of their society. From generation to generation, they passed the stories down by memorizing long lyric poems and reciting them to their audiences.

For centuries the Irish people highly valued their storytellers. But in the 1600s when Gaelic culture suffered widespread destruction under English occupation, the role of the seanchaithe diminished. The stories, however, did not. Traveling storytellers continued to carry the old tales forward and added more as local events transpired.

In the late 19th and early 20th centuries, during the Irish Literary Renaissance people like Douglas Hyde (the first President of Ireland from 1938 to 1945) and W.B. Yeats (Nobel Prize-winning poet) listened to seanchaithe in the small towns of Ireland to collect and publish many of the old stories. You can still find their books: Beside the Fire (Hyde) and Fairy and Folk Tales of the Irish Peasantry (Yeats).

In the 20th century, seanchaí and Tony Award-winning actor Éamon Kelly wrote, “the storyteller was the local historian and genealogist — a walking library, the repository of folk wisdom and culture.” Despite the fact that modern communications like radio and television were drawing attention away from village seanchaithe in the 1950s and ’60s, he was able to bring the ancient art form into the modern era with his radio and TV shows.

Even today, the art of the seanchaí endures. Helena Byrne, who offered two online storytelling performances in May via Zoom for the Irish Cultural Center of the Mohawk Valley, told us stories of the faery folk and ghosts which she had collected through interviews and learned from older storytellers. But good storytelling is much more than words or plotlines. The art is in the expression the storyteller weaves into the tale with voice, gestures, and in Helena’s case even songs.