Fr. William Corby, an Irish Priest in the US Civil War

A local musician dives deep into the stories of Irish immigrants who served in the US Civil War. 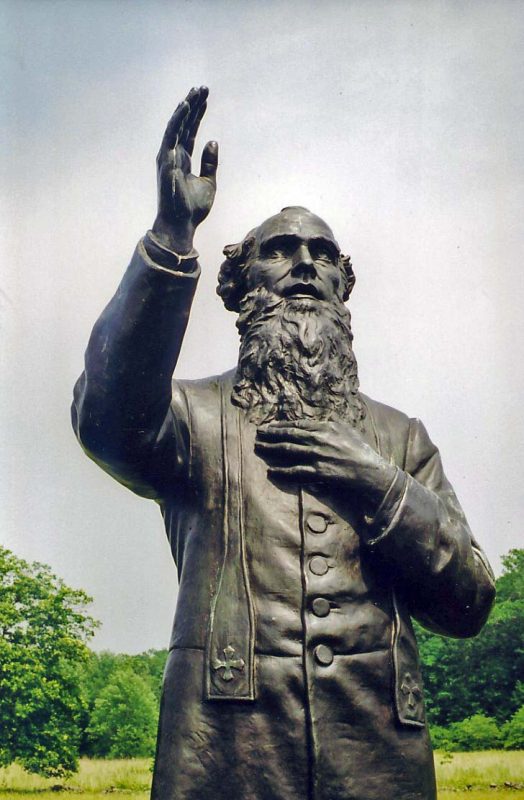 One of the more interesting Irishmen who served in the Civil War was Father William Corby. Corby’s father Daniel emigrated from County Offaly in the early 1800s. Father Corby was a priest at Notre Dame University when the war broke out. He describes his decision to volunteer his services to the Irish Brigade as a result of his patriotic zeal and his desire “to give salvation to those destined to fall” in battle. In his book Memoirs of Chaplain Life he describes his feelings as he took a train from Chicago to New York to meet the soldiers he
would serve with, “It was much like getting married. We made the engagement for better or worse, for richer or poorer, till death do us part.”

At that time Father Corby did not know how many partings he would endure, how many dying men he would comfort, or how many wounded he would tend to. His book is one of the best first-person accounts of the everyday life of the soldiers in the Civil War that I have read. He knew some of the great personalities of the era, as well as hundreds of common soldiers.

Although he served in the 88th regiment, he was quite impressed with another regiment of the Irish Brigade, the Fighting 69th. His description of Thomas Francis Meagher, commander of the 69th – “He had a superior intellect, a liberal education, was a fine classical writer, and a born orator. He was very witty but more inclined to humor; was fond of witty or humorous persons and admired those who possessed those gifts. He was a great lover of his native land, and passionately opposed to its enemies; strong in his faith, which he never
concealed, but on the contrary, published it above board; and where ever he went he made himself known as a Catholic and an Irishman”.

In the 1860s in America, it was a bold position to take as discrimination raged against both Irish and Catholics. Corby also met personally with President Lincoln during the war. He was asked by the soldiers to plead for clemency for a popular member of the regiment who was court-martialed for abandoning his post, getting drunk, and committing a serious crime. The soldier was sentenced to death. He describes approaching the White House – “I felt like a fresh blushing Lieutenant”. He writes that Lincoln was “a very tender-hearted man” and he told the president he was leaving the man’s life in his hands. Lincoln responded, “Chaplain see here! I will pardon him if General Meade will.” Unfortunately, the generals in the field felt Lincoln was too kindhearted in pardoning so many, and Meade refused to overturn the court-martial. When Father Corby returned to camp, he gave communion to the condemned man and comforted him up to the time of his execution.

Corby is probably most famous for his giving absolution to the Irish Brigade before they entered the battle of Gettysburg, and there is a statue there of him in the spot where it occurred. From Colonel St. Clair Mulholland – “There are yet a few minutes to spare and the time is occupied by one of the most impressive religious ceremonies I have ever witnessed. The Irish Brigade stood in a column of regiments, closed in Mass. The chaplain of the brigade, Rev. William Corby, proposed to give a general absolution to all the men before going into the fight. This was perhaps the first time it was ever witnessed on this Continent. Father Corby stood on a large rock in front of the brigade. He explained that each one could receive the benefit of absolution by making a sincere act of contrition and firmly resolving to embrace the first opportunity to confess his sins. As he closed his address every man, Catholic and non-Catholic fell on his knees as Father Corby pronounced the words of absolution.”

As this was occurring the soldiers could hear the sounds of the nearby battle as it raged close by. Corby intended the absolution to cover all the fighting men, north and south. He knew many of those who were kneeling before him were soon to die or suffer serious wounds on the battlefield. He had been with the brigade when it was 3,000 strong and at Gettysburg the unit was down to 530 men. Of the men in the brigade Father Corby absolved that day, 27 were killed, 109 were wounded, and 62 were listed as missing.

Father Corby’s recollections were famous and appear in many historical accounts of the Civil War, past and present. After the war, Corby returned to Notre Dame where he served two terms as its president. During his tenure, the school grew, admitted more students, and added the School of Law. It may also be that the name the “Fighting Irish” came about because of the priest who served as chaplain of the Irish Brigade. His Gettysburg statue was duplicated for Notre Dame University and is located outside Corby Hall. There students have been known to call him “fair catch Corby”.

This is the second in Bill’s series on Irish immigrants in the American Civil War. You can read the first post here.